Get to Know Each Other Aboard This Self-Driving Motorcycle

【Summary】IT’S TIME TO imagine, design, and develop a new breed of urban vehicle. Something that will minimize the human footprint, that can operate year round in any weather, and run on electricity instead of gasoline.

IT'S TIME TO imagine, design, and develop a new breed of urban vehicle. Something that will minimize the human footprint, that can operate year round in any weather, and run on electricity instead of gasoline.

That's the thinking behind the Cyclotron, a concept I created, inspired by the Tron Light Cycle and Lit Motors' self-balancing C1.

Inside this enclosed, autonomous motorcycle, two passengers would sit facing one another, given a rare chance to relax, chat, and get to know one another (or ignore each other and look at their phones).

A gyroscopic system like that on the C1 would keep the vehicle stable at all times, even when fully stopped—no need to put your feet down to keep from tipping over. The electric motor would send power to both wheels for improved traction in winter conditions, or power just one to conserve power. I imagine you'd want to change the tire tread depending on the season, maybe adding studs for icy roads.

Each Cyclotron would recharge with wireless power transfer and would be allowed to buy and sell electricity in real time to other nearby vehicles depending each vehicle's stores and requirements. The interior of the Cyclotron would feature two adjustable seats. Both butterfly doors would be able open and drop you off on either side of the street since the bike can travel in both directions.

It's autonomous, so no need to steer—just tell it where to go. Or, let it access your agenda and figure it out for itself.

I'll let your imagination fill in the rest of the cool features: heated and cooled seats and cup holders, climate-controlled cabin, surround sound or a noise canceling system, and so on.

The Cyclotron would work as a personal vehicle or as a shared transit system like my Gotoo concept. Green Taxi operators like Montreal's TEO could even buy them and operate them in fleets across North America. They would definitely help reduce road congestion and the energy required to commute compared to existing electric cars due to their smaller size.

I developed the Cyclotron concept with Ashish Thulkar, a freelance industrial designer at the Indian Institute of Science. 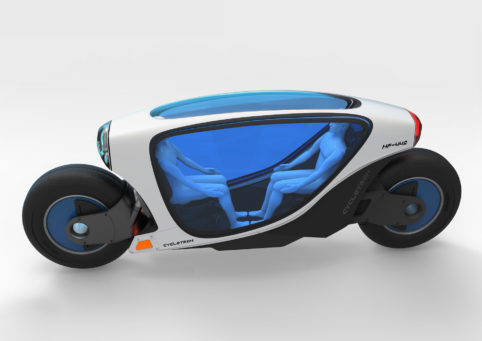