SPECIAL FEATURE: Unraveling the DNA of the Car of the Future, Part Two

【Summary】Never before in the 130 year history of the auto industry, has the automobile undergone such revolutionary changes: Cars that drive themselves, cars that can communicate with each other and smart infrastructure, cars that are shared and not owned, and even cars that are powered by electric motors. Central to all these emerging technologies is a higher level of electrification.

The 'When and How' of Electric Vehicles

Never before in the 130 year history of the auto industry, has the automobile undergone such revolutionary changes: Cars that drive themselves, cars that can communicate with each other and smart infrastructure, cars that are shared and not owned, and even cars that are powered by electric motors!

Central to all these emerging technologies is a higher level of electrification. Notwithstanding the fact that ‘Zero Emission Vehicles' will mostly be powered by high voltage batteries or fuel cells, legacy 12-volt systems also do not have the energy to power Mild Hybrid EVs, or cope with the demands of Level 4 and 5 connected automation, not to mention the loads generated by modern infotainment systems.

This is the consensus view held by an overwhelming majority of industry stakeholders – what's not as clear though, is the timeframe for EVs to dominate, or what technologies will lead the revolution. This will be determined by the ‘push' from technology and the ‘pull' of customer acceptance. (Mindset in the figure below) 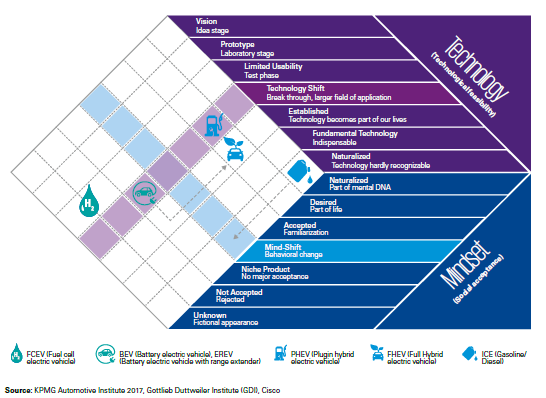 For instance: Based on traditional ‘linear forecasting,' centered on model life cycles and the evolution of technology, most research indicates that the next step in electrification – the 48-volt MHEV could account for 40 percent of all vehicle sales leading up to 2030.

But a MHEV is not classified as an EV, to be exact, it is not capable of electric-only propulsion – although sometime in the future it just might be! The EV category is reserved for Plug-in Hybrid EVs (PHEVs), Hybrid EVs (HEVs), Battery EVs (BEVs) and Fuel Cell EVs (FCEVs) – all capable of electric only travel.Forecasting the future of these vehicles is made extremely difficult because of the volatility of variables such as:

Therefore the point at which the technology reaches critical mass cannot be fixed; BEVs could achieve a 20 percent market share anywhere from 2035 to 2042, as indicated by this graph in a Morgan Stanley report on the subject: 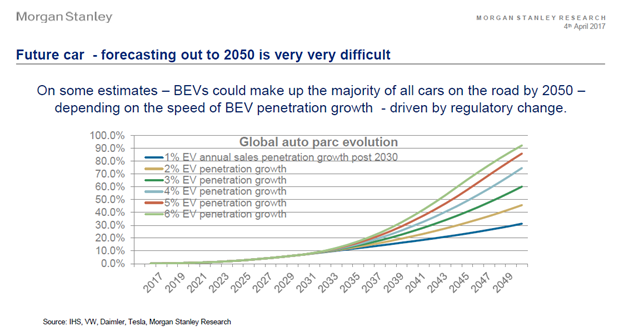 Supporting this view, a November 2017 IHS Markit study predicts all-electric vehicles will account for about 19 percent of sales by 2040, while the Boston Consulting Group estimates that EVs will make up 14 percent of production by 2030.But, as mentioned earlier, there are several variables that could dramatically upset these forecasts.

The Carrot and the Stick Approach Could Wreak Havoc with Predictions

Driven by the Paris Accord that seeks to reduce Greenhouse Gas emissions by 80 percent leading up to 2050, governments around the world are enacting ever stricter regulations aiming to reduce CO2 exhaust gas emissions.

In Europe CO2 emissions drop to 95 g/km in 2020/ 2021, with the European Commission proposing a further reduction of 15 percent by 2025 and 30 percent by 2030 compared with 2021. While in America, the Obama-proposed fleet average of 54 MPG may still be enforced.But in some countries this incremental approach is being rejected in favor of the ‘big bang,' where ICEs are banned completely. So with the UK leading the way, with a complete ban coming into effect in 2040, other countries such as Germany, France, China and India have all made their intentions clear that they too will restrict or even outlaw fossil-fuel burning passenger vehicles.

And in the world's largest car market, China, where the Ministry of Industry and Information Technology has already called for electric and plug-in hybrid cars to make up at least 20 percent of the country's light-vehicle sales by 2025, an unexpected complete ban of ICEs would have a significant impact on the forecast rollout of EVs.

It's important to note that the government has announced that it is considering banning ICEs completely, but has not proposed any timeframe or mechanism.

However, banning ICEs and paving the way for EVs is only one part of the delicate equation - innovations generally first enter the market in low volumes and at a significant cost premium, which needs to be offset by a positive policy framework:

In America the federal government and a number of states offer financial incentives, including tax credits, for lowering the upfront costs. A federal Internal Revenue Service (IRS) tax credit of $2,500 to $7,500 is given for a plug-in electric drive passenger vehicle using a traction battery that has at least five kilowatt-hours (kWh) of capacity, uses an external source of energy to recharge the battery, has a gross vehicle weight rating of up to 14,000 pounds, and meets specified emission standards.

The credit will begin to be phased out for each manufacturer in the second quarter following the calendar quarter in which a minimum of 200,000 qualified plug-in electric drive vehicles have been sold by that manufacturer for use in the United States.In Europe the incentives mainly consist of tax reductions and exemptions, as in countries such as Austria and Germany, and bonus payments and premiums for the buyers of electric vehicles in France and the UK.

For example, in Germany the government offers an environmental bonus of €4,000 for pure electric and fuel-cell vehicles and €3,000 for plug-in hybrid and range-extended electric vehicles. Whereas in France, under a bonus‐malus system, a €6,300 premium is granted for the purchase of a new EV with a further €10,000 granted to electric vehicle buyers when they scrap an old diesel‐powered vehicle. Electric vehicles are also exempt from company car tax, while hybrids emitting less than 110g CO2/km are exempt during the first two years after registration.

So with emissions regulations making ICE powered vehicles more expensive, and government incentives reducing the cost of EVs, manufacturers are anticipating that the time to critical mass can be reduced. At which stage costs will automatically fall on the back of competitive economies of scale.

"Eventually, we'll reach a point where we don't need incentives anymore to boost EV sales," said Xavier Mosquet, a senior partner at Boston Consulting Group. By 2030, Mosquet believes EV demand will be driven by market forces, not regulation and incentives.Nevertheless, with batteries accounting for between 30 to 40 percent of the cost of an EV, battery manufacturers are under pressure to come up with innovative solutions that not only decrease cost but also improve time-to-charge, energy density and range.

Electric Vehicles, like virtually all other innovations, will follow a ‘learning curve,' meaning that higher production volumes will lead to reduced prices. According to American professional technologist, Ramez Naam, batteries appear to have a learning rate of around 21%, meaning that every doubling of scale will reduce costs by 21%.

According to Tom De Vleesschauwer, IHS Markit's transport and mobility practice leader, a recent study showed that manufacturers need to reduce battery costs from the current $200 per kilowatt-hour to about $100 per kilowatt-hour to be competitive with gasoline-powered cars. By so doing, price parity could be achieved in the 2030s.

BCG also believe that the total EV operating costs will also drop, until the cost of owning and operating an electric vehicle over 10 years will fall below that of a comparable combustion-engine vehicle; possibly by 2021.

Moreover, the expected shift to ride-sharing in big cities and larger metropolitan areas, especially in the United States, will further increase demand for EVs; in large part because the shared vehicles will accumulate miles more rapidly and thus with preferential operating costs, narrow the gap with combustion-engine vehicles.

Likewise, a shift to self-driving vehicles, particularly in ride-sharing fleets, will boost EV demand after 2025. The cost per mile for a battery-powered self-driving vehicle could drop as low as 74 cents by 2030, making ownership of these vehicles considerably less expensive than those with combustion engines.

Notwithstanding the importance of market forces on the cost of the battery pack and therefore the EV, new battery technologies will also play a major role in achieving significant cost reductions while at the same time overcoming consumers' apprehensions.

Whereas Li-ion battery chemistry is expected to prevail in EV applications well into the first quarter of the 21st century, LG Chem predicts the emergence of new technologies thereafter:

One such technology, the ‘All-solid battery,' is the brainchild of a team of engineers led by 94-year-old John Goodenough, professor in the Cockrell School of Engineering at The University of Texas in Austin and co-inventor of the lithium-ion battery.

Li-ion components. Moreover the technology permits faster charging (in the order of minutes rather than hours) and increases the number of charge/ discharge cycles, thereby extending the battery life. In experiments, the researchers have achieved more than 1,200 cycles with little increase in resistance.

And in an attempt to overcome consumers concerns around charge times, Advanced Enevate HD-Energy Technology have developed a silicon Li-ion battery technology for EV cells (NCM-based) that charges to 90% in just 15 minutes, and 50% in just over 5 minutes - 8X faster than conventional batteries and more than 5X faster than the best "fast-charge" batteries.

Unlike conventional Lithium-ion batteries, where the available capacity degrades the faster you charge, Enevate batteries hold their charge even with significantly faster charging.

Importantly, this 5-minute charging would allow flow-through charging stations where EV drivers would only wait a few minutes to "fill up" just as they would with regular gas stations – thereby instilling consumer confidence. In addition, with such short charging times, smaller batteries can be used in some EVs making them much more affordable.

So after all is said and done, the consensus view that EVs will achieve critical mass somewhere around the mid to late 2030's is supported by the technology timeline as well as predicted cost reductions and improvements in performance. But even then, as with any maturing technology it's likely that EVs will take a further 20 years to become the dominant form of road transportation, which means the trusty ICE is likely to be around in significant numbers until at least the middle of the century.