SPECIAL FEATURE: Unraveling the DNA of the Car of the Future, Part Three

【Summary】In a recent article on the future of the car industry, industry insider and former GM vice chairman Bob Lutz, was quoted as saying: “Kiss the good times goodbye,” referring to the radical transformation the passenger car, and indeed the industry, is undergoing. And nowhere is this revolution more astonishing than in the automation of the vehicle.

When do we Kiss the Good Times Goodbye?

In a recent article on the future of the car industry, industry insider and former GM vice chairman Bob Lutz, was quoted as saying: "Kiss the good times goodbye," referring to the radical transformation the passenger car, and indeed the industry, is undergoing. And nowhere is this revolution more astonishing than in the automation of the vehicle.

Although many automated features have already found their way into Advanced Driver Assist Systems (ADAS), the world is waiting with baited breath for Level 4 and 5 automation where the driver becomes a full time passenger: In the case of Level 5 the vehicle could even lose its steering wheel and pedals.

Interestingly Lutz believes that this will happen within 15 to 20 years because human-driven vehicles will be legislated off the highways. This, he believes, will come when 20 to 30 percent of vehicles are fully autonomous, and countries see the dramatic reduction in road accidents. If this transpires we can expect self-driving cars to become the norm by about 2050

He further hypothesizes that there will be a transition period. Everyone will have five years to get their car off the road or sell it for scrap or trade it on a ‘module': This referring to a time when cars become a shared commodity.

PricewaterhouseCoopers seems to agree with his forecast in their 2017 edition of the "PwC Automotive Industry Bluebook," they claim that by 2030 autonomous vehicles will capture 15 to 20 percent of the market.

At the turn of the century this would have made for a good discussion at the debating club, but today it's a loaded question that carries with it significant socioeconomic consequences, and thus deserves closer scrutiny.

But, before we go any further we need to make sure we're all on the same page when it comes to the term Automated/ Self-driving/ Autonomous vehicle.

For this we'll use the globally accepted SAE standard, J3016, which defines the five levels of automation as follows: 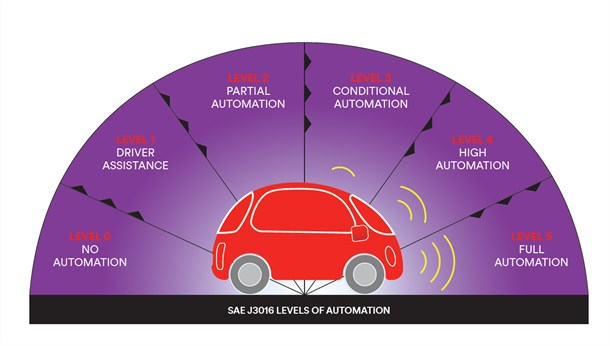 Level zero: The human has complete control over their vehicle including the steering, braking, and throttle. Essentially the way driving is done today.

Level 1:  Small elements of driving such as braking can be done automatically by the car.

Level 2:  At least two functions are automated such as lane centering and cruise control. In this phase the driver can have their hands off the steering wheel and foot off the pedal, however they still must always be ready to take control.

Level 3:  Although the driver is still present at this level, they aren't required to monitor the environments around them as much as they would in previous levels.

Level 4:  According to the Department of Transportation (DOT), vehicles at this level are "designed to perform all safety-critical driving functions and monitor roadway conditions for the entire trip."

Level 5: This stage simply means that the vehicle is fully autonomous and has no steering wheel or general controls for a human to use.

For the sake of brevity we'll examine the two most relevant levels, namely Levels 4 and 5.

The Difference Between Levels 4 and 5 Autonomy

If the end-game is fully automated autonomous driving, as in L5, then L4 can be viewed as a stepping stone along the path to fully self-driving vehicles.

The practical difference between these levels is that at L4 self-driving is possible in limited areas (geofenced) or under special circumstances, such as traffic jams or highway cruising. Outside of these areas or circumstances, the vehicle must be able to safely abort the trip, i.e. park the car, if the driver does not retake control.

This is what Ford is promising to roll out in 2021 as a car-sharing platform.

L5, on the other hand, demands that the vehicle can drive itself anywhere under any conditions (Even in challenging situations such as when there are no lane markings) without human intervention – thus the absence of controls.

This is what Waymo has been targeting with several vehicles in its fleet of FCA Pacificas operating without ‘backup' drivers, although the vehicles are still equipped with controls.

Waymo claim they are very close to ‘finalizing' the specification, but have not alluded to any firm series-production partnerships or timing.

The challenges that Waymo faces in rolling this out is less about the system or specification and more about cost, regulation and in particular consumer confidence.

Can manufacturers guarantee the safety of their self-driving cars?

According to a 2017 AAA survey, while US drivers are eager to buy vehicles equipped with autonomous technology, they fear fully self-driving vehicles: 54% of respondents "feeling less safe sharing the road with self‐driving cars while they drive a regular car."

Mobility researchers at the University of Michigan believe that for consumers to accept driverless vehicles, tests will need to prove with 80 percent confidence that they're 90 percent safer than human drivers. To get to that confidence level, test vehicles would need to be driven in simulated or real-world settings for 11 billion miles. But it would take nearly a decade of round-the-clock testing to reach just 2 million miles in typical urban conditions.

In total Waymo has covered 3.5 million autonomous miles while testing in 20 different cities, adding a further 2.5 billion simulated miles using virtual environments reflecting real-world conditions. So even though in 2017 Waymo's fleet of 60 self-driving cars covered 635,868 miles of testing in California, recording only 0.2 disengagements (Where the driver had to take back control of the vehicle) for every 1,000 miles, the company is still a long way from ‘proving' the technology safe.

So the question is: Do OEMs release well-tested but not perfected automation within one to two decades, knowing that the imperfect technology will invariably be the cause of a few accidents; or do they continue testing to improve the technology to the point where the systems are statistically proven safe, knowing that many lives will continue to be lost?

The answer is possibly best left to legislators and regulators to determine, but even here there's unlikely to be a speedy conclusion: While self-driving cars have been tested on public roads in America since 2009, only recently has a federal legislative framework, specifically focused on connected and autonomous cars, been discussed - the House's SELF DRIVE Act and the Senate's AV START Act.

With comprehensive regulation likely to take time, it would appear that a timeous solution to safety concerns would still lie with the auto and tech industries – quite possibly through improved redundancy, supported by connectivity.

Could connected cars be the last piece of the safety puzzle?

With the connected car already seen as an interim step on the way to the truly autonomous vehicle, IHS Markit predicts that more than 70 million connected cars will be on the road by 2023. Beyond after-the-fact emergency services, new cars are increasingly being equipped with sensors that assist with preventing accidents before they occur.Recognizing the potential to save lives the U.S. Department of Transportation under the Obama administration proposed rules that would require cars to "talk" to each other. Assuming the rule goes into effect in 2019 as planned, automakers would be required to begin building vehicle-to-vehicle (V2V) technology into their cars in 2021, ensuring that all new cars are so equipped by 2023.These connected vehicles will be fitted with wireless connectivity that would enable the driver of the vehicle to have 360 degrees of information about the surroundings – stretching up to 300 meters!

The connectivity of vehicles will take the form of:

This connectivity, together with the automated systems already undergoing testing, may well provide enough redundancy for manufacturers to significantly mitigate the risks of maturing autonomous technology.

However, this increased connectivity will see the volume of data being created and subsequently sent to the cloud increasing exponentially as manufacturers find innovative ways to leverage the IoT.So, while storage and computing power is increasing according to Moore's law, meaning they double about every 18 months, bandwidth is increasing at a far slower pace, thereby curtailing the ultrafast data transfer speeds needed for vehicle connectivity. Some estimates place bandwidth progression at less than 40% per year; implying that there will ultimately be more data being sent to the cloud than there will be bandwidth.

According to Brian Krzanich, Intel's CEO, data is the new currency of the automotive world: Cameras generate 20-60 MB/s, radar upwards of 10 kB/s, sonar 10-100 kB/s, GPS will run at 50 kB/s, and LIDAR will range between 10-70 MB/s. Crunch those numbers, and each autonomous vehicle will be generating approximately 4,000 GB, or 4 terabytes, of data a day.

In America alone, there are currently 263 million registered passenger cars, meaning that if automated vehicles capture a conservative 10 percent of the American market, at 4 terabytes of daily data, 38.4 zettabytes of data would be generated annually.

In this scenario 5G is deemed to be a key supporting technology to facilitate Big Data, enhance the user experience and transform the transportation system as a whole.

While today's networks will still handle many applications, 5G will be a key enabler for connected autonomous vehicles as they will be able to almost instantaneously communicate with each other, buildings, and infrastructure with the ultra-low latency required for connected automated driving.

For instance: With a car, travelling at 60 MPH, covering a third of a football field every second, the safety of human lives and property comes down to computations being made in microseconds - 5G promises sub 10-millisecond latency for mission-critical apps, compared to the 50 to 100 millisecond latency for existing LTE broadband.

The problem, however, is that 5G is only set for implementation in 2020.

So once again the roll out of the self-driving car seems to depend on whether consumers and regulators are going to accept a less than perfect technology (to begin with) or demand guarantees backed up by comprehensive test results.

The most likely route is exactly the one currently being followed: A mix of the 6 levels of automation, with some manufacturers such as Tesla and Audi, choosing to enter the race at L3 and others such as Waymo going for full automation, will give the consumer time to get used to the quantum shift in technology, while giving manufacturers time to evaluate and refine self-driving cars. 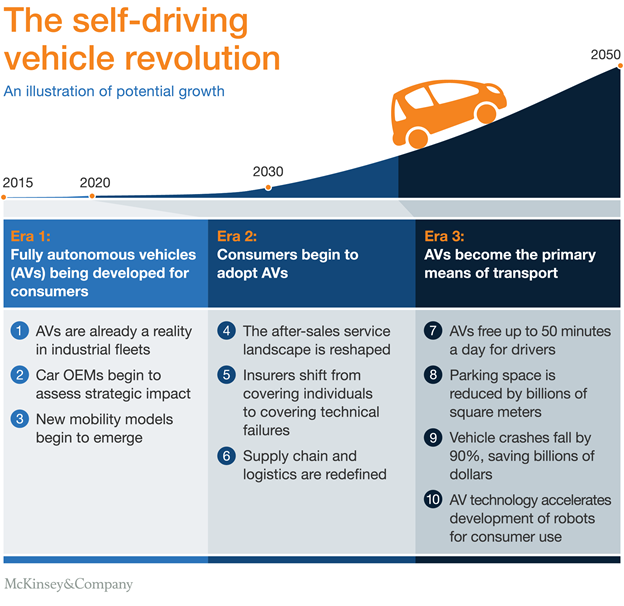 The fully autonomous car, however, isn't likely to be at commuters' beck and call for at least another two decades or so, when several critical but still-nascent technologies — notably artificial intelligence, machine learning, the human–machine interface, and key elements of the car's underlying infrastructure — and the various features they might enable finally reach a higher level of maturity.

So to get back to Bob Lutz's prediction: Technically it's optimistically quite possible that we could see Level 5 automated cars on the roads within twenty years but it's doubtful whether regulation and consumer confidence would have matured to make the transition an easy one. In this case it would be safe to say that critical mass for full automation is likely to occur between 20 to 25 years.