Panasonic and Toyota are exploring the development of prismatic cells, the two companies said at a news conference in Tokyo on Wednesday. The agreement builds on a joint venture Toyota and Panasonic have had for over two decades. The collaboration will include solid-state batteries as well.

Prismatic cells — sometimes referred to as a ‘pouch cell', reduce weight and cost. Prismatic cells make optimal use of space by using a layered approach. Other designs are wound and flattened into a roll (cylindrical). Prismatic cells are predominantly found in mobile phones, tablets and low-profile laptops ranging from 800mAh to 4,000mAh. 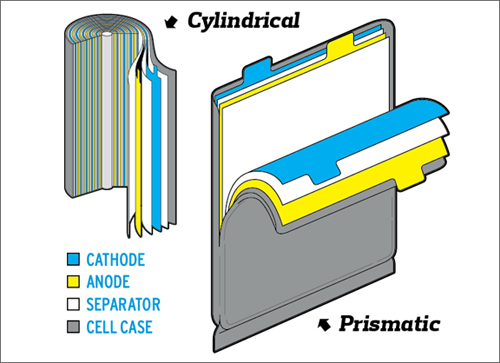 Prismatic cells are also available in large formats. Packaged in welded aluminum housings, the cells deliver capacities of 20–50Ah and are primarily used for electric powertrains in hybrid and electric vehicles.

Prismatic cells are made up of many positive and negative electrodes sandwiched together leaving more possibility for short circuit and inconsistency. The prismatic cell improves space utilization and allows flexible design, but it can be more expensive to manufacture and have a shorter cycle life than the cylindrical design. However, their higher capacity makes it difficult for a vehicle's battery management system to protect each cell from over charging and dissipating heat.

Toyota has also been pouring resources into the development of a solid-state battery that it hopes to have in electric vehicles by the early 2020s. Solid-state batteries promise to offer shorter charging times, longer driving ranges and improved safety from current-generation lithium-ion cells.

Panasonic provides lithium-ion cells for Toyota models including the plug-in Prius. Panasonic and Toyota have had a joint venture since 1996 called Primearth EV Energy Co., which makes lithium-ion and nickel-metal hydride batteries for other Toyota cars. Toyota controls 80.5 percent of the joint venture, with Panasonic owning the remainder.

Panasonic is also the exclusive battery supplier for Tesla's current production models, and partnered with Tesla on the company's new $5 billion gigafactory in Nevada to make batteries.

Toyota Looks to Catch Up On Electric Cars

Toyota has not invested the same in electric cars as rival automakers. As global rivals from Volkswagen AG to General Motors Co. spend billions of dollars to shape the future of electric cars, Toyota is now on a mission to catch up.

President Akio Toyoda, the 61-year-old grandson of founder Kiichiro Toyoda, has acknowledged that Toyota has been a "a little bit late" on EVs, with governments around the world cracking down on pollution caused by fossil fuels.

"Electrification is a major part of the once-a-century transformation taking place in the auto industry now," Toyoda told reporters in Tokyo Wednesday. "In order to make ever-better cars, we need to collaborate with a specialized battery manufacturer." The safety of EV batteries is a "pressing issue," he added.

Toyota has picked up the pace with development of electric cars amid a boom this year, after initially betting on hydrogen to power its zero-emission vehicles. The company launched a venture with Mazda Motor Corp and affiliate-supplier Denso Corp. to make electrical parts across a spectrum of models.

Nissan has sold some 300,000 of the all-electric Leaf since 2010 and Tesla Inc. has delivered more than 250,000 EVs since the first Roadster rolled out in 2008. Although Toyota's Prius plug in hybrid is a very popular model, Toyota does not yet offer a fully-electric passenger car.

Toyota aims to have an electric component in 50 percent of all its vehicles by 2030, including hybrid cars, the company said. Toyota wants to increase hybrid sales to 4.5 million by 2030.

Battery prices have plummeted almost 80 percent since 2010, and will drop by more than half again by 2026, bringing electric cars to price parity with their gasoline-burning cousins, BNEF predicts.

Toyota said is open to other companies joining the partnership to speed the pace of development.

Honda Kills the Clarity Electric, Its Only EV Available in the U.S.

Waymo, Others Stop Testing Self-Driving Cars on California Roads Due to the Coronavirus