SPECIAL FEATURE: 5G Will Revolutionize Cars and the Networks That Support Them

【Summary】All of the smart cars on the market today have the same Achilles heel — the cars are limited by existing network performance and rely solely on sensors and cameras for maneuvering and navigation. Safe, reliable automated driving will require an unfailing, robust and omnipresent wireless network that has extensive coverage, high data transfer speeds, and low latency.

With an eye on fully self-driving cars and shared mobility, connectivity has become a central focus for automakers. The head of Mercedes-Benz Cars, Dieter Zetsche, even going as far as calling the new Mercedes A Class "a true smartphone on wheels."

Still, all of the smart cars on the market today have the same Achilles heel — the cars are limited by existing network performance and rely solely on sensors and cameras for maneuvering and navigation. Safe, reliable automated driving will require an unfailing, robust and omnipresent wireless network that has extensive coverage, high data transfer speeds, and low latency.

At the moment 4G LTE, with speeds of about 12 Mbps and latency of 50ms is not capable of satisfying the demands of connected, safety critical autonomous systems. On the other hand, the next generation 5G wireless networks with speeds of about 10 Gbps and 1ms latency, are well suited to support everything from smart cars and buildings to internet-connected manufacturing. 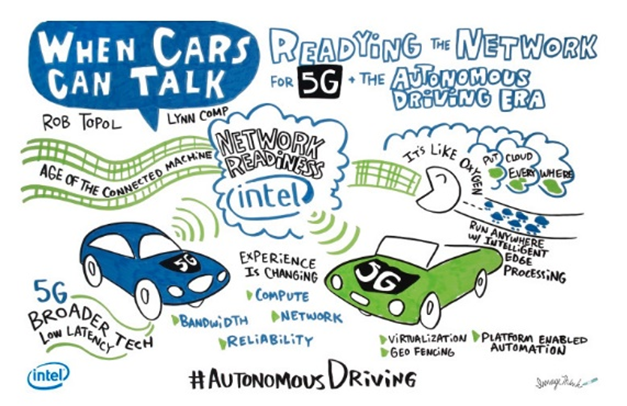 This ability for cars to reliably communicate with each other and their surroundings is set to have a profound impact, not only on vehicles' functionality and onboard services, but also on the efficacy of the networks that these connected and often self-driving cars rely on.

5G Technology Set to Shape the Future of Connected Vehicles

The connected future will see the car talking to everything and everyone it encounters. It will be controlled by cloud-based, machine learning algorithms that continually evaluate and adjust the vehicle's behavior.

While today's networks will continue to handle many applications, 5G will be a key enabler for connected and autonomous vehicles, as they will be able to almost instantaneously communicate with each other, buildings, and infrastructure. 5G will also enable digital services from within the car, thereby enhancing the passenger experience, and increasing mobility revenue potential.

With the roll out of the 5G network set to play a pivotal role in the future of road transport the automotive industry has readily thrown its weight behind the technology. Organizations such as the European Automotive Telecom Alliance (EATA) and the 5G Automotive Association (5GAA), backed by the industry giants Audi, BMW, Daimler, Mini and Rolls Royce in addition to telecom and technology companies, have already defined the objectives of 5G as required by the automotive industry as follows:

What is more, the ability of 5G to handle Big Data with ultra-low latency gives vehicle designers, manufacturers and service providers a whole new set of tools that will profoundly reshape the functionality of transport.

While connectivity is currently widely used for telematics to track and monitor vehicles, or for ‘Over The Air' software updates, in automated vehicles 5G will support other radical safety innovations, such as:

However, while the 5G Cellular Vehicle to Everything (C-V2X) technology exists, to implement these innovative solutions, the overriding challenge for the network and connected cars will be land area coverage and the associated cost.

Currently, there are vast areas with roads that have little or no signal from today's mobile networks. For instance, in Europe there is an 86 percent coverage of 4G in urban areas, compared to only 36 percent in rural areas. Additionally, the 5G network will most likely require base stations with a much shorter range than that provided by today's 4G equipment.

In this highly connected environment customers will expect to receive these paid-for services on the fly, without interruption. For autonomous vehicles relying on fulltime connectivity for mission-critical safety systems, this will be vital.

However, telecommunications companies have little incentive to provide expensive and fast 5G coverage in rural areas, making them potential ‘no-go' zones for self-driving cars that rely on 5G connectivity. In this scenario, dead sectors in coverage would make autonomous vehicles incapable of inter-city highway travel.

However, creating a truly connected road network will cost companies companies a fortune, raising the question: "Who's going to pay for it?"

To address the problem, network service providers could potentially find ways to monetize 5G networks that cover rural roads. For instance, these networks could be used to offer a wide variety of services to automakers, including media streaming services for passengers in the car, navigation and weather updates, as well as advanced cybersecurity services to monitor vehicles for intrusions.

While this isn't likely to eliminate dead zones entirely, the cars would be able to revert to GPS for navigation, or download sections of maps ahead of time, as well as media for passengers to enjoy while out of range. All of which would have to happen seamlessly.

Further reducing the dead zones, ‘mesh networking', which allows people to use their internet connection to provide access to others, could extend the coverage of certain services in network sparse areas.

Although a wireless spectrum band (5.9 GHz) is already reserved for CAVs, it is primarily used for dedicated short-range communications (DSRC), a wireless network that operates separately from 4G/5G and Wi-Fi to enable vehicle-to-vehicle and vehicle-to-infrastructure communication. But as the name implies, it's meant to be a short-range solution with about 0.6 miles coverage, requiring an overarching network to extend the range.

The idea with the mesh is to enable phone-to-phone-to-phone communication, or, in the case of CAVs, car-to-car-to-car, thus creating a chain. The starting point would be a Wi-Fi or cellular connection with all the other devices/ vehicles linked to it piggybacking off of its connection to access the internet, rather than each link connecting to the cell tower individually - Every person who's directly attached to a cell phone tower would become their own mini-ISP (internet service provider).

In a CAV scenario, all wireless internet connections, including Wi-Fi, 4G/5G or DSRC connections at households and businesses near the road, could be used as vehicular communication devices.

To incentivize subscribers to open up their wireless connections to a data-reselling program, such as the blockchain-powered program RightMesh, used for mobile mesh networks where people could earn money for unused plan data, could be adapted to cater to C-V2X.

These mesh networks have already been established in population-dense parts of the developing world such as India, Bangladesh, and Latin America, where Wi-Fi and cellular infrastructure are lacking. The technology is also being used in the United States in communities that have been passed over by telecom companies.

However, to ensure the low latency and comprehensive coverage required by connected autonomous vehicles, a global, hybrid network that leverages both satellite and terrestrial technologies to connect cars everywhere is being studied.

Taking to Space to Enhance 5G Coverage on Earth

In 2017 the European Space Agency (ESA), together with companies from the aviation and aerospace industries, launched an initiative called Satellite for 5G, in order to sound out and promote the potential of satellite technology in the context of 5G.

Thanks to satellite's unique network extension capability and architecture, safety and operational requirements of the connected vehicle can be met efficiently and securely.

The automotive industry knows that innovation is critical in all aspects of business, including production, driving experience and safety, thus all the major brands are aiming to make smarter and more connected vehicles.

To achieve this goal, it would be much more expensive, and counter-productive, for each automotive brand to develop its own next generation wireless communications system. By supporting the development of 5G, and in turn defining the specifications that smart cars need, they would be speeding up the progress of 5G into the real world.

While the shift to full 5G connectivity may be gradual we have already seen limited trials initiated in America, Europe, China and Japan and can expect the pace to quicken, as commercial roll out of the network in 2020 approaches.

After Funding Round From BlackRock, EV Charging Operator IONITY is Investing 700 Million Euros to Expand its Network in Europe to 7,000 Chargers by 2025