【Summary】The Ford Motor Company finally confirmed yesterday that it is planning an electric F-150 pickup. The only problem is that it might take years to show up in dealer showrooms.

The Ford Motor Company finally confirmed yesterday that it is planning an electric F-150 pickup. The only problem is that it might take years to show up in dealer showrooms. Ford did not provide a timeline for the electric F-150 pickup, but the company did say a hybrid version of the F-150 is coming in 2020, so it's safe to say that an fully-electric version is at least several years away. Buy why wait so long?

Tesla CEO Elon Musk in known to make bolt statements, one of his latest new projects is rumored to be an electric pickup truck in the works from Tesla. Tesla's planned pickup could the the most powerful pickup truck ever made and Musk will likely promote it as such. Unless of course Ford electrifies the F-150 and brings it to market first.

However, newcomer Tesla is entering into a competitive space with an electric pickup truck that already occupied by Ford, General Motors, and Dodge, all of whom count on their pickup sales for a large chunk of their annual profits.

Three of the most popular trucks in the U.S., the Ford F-150, Chevy Silverado, and Dodge Ram all have their own loyal customer base, just like people who are die hard fans of certain sports cars, such as the Mustang, Corvette, M3 or 911. Some drivers are simply attached to automotive brands, which is a good thing for Ford.

For example, a Dodge Ram owner might proclaim that the Ram is the best truck, while Chevy Silverado fans might say that GM truck engines are much more reliable than a Ford's. It is this type of fierce brand loyalty that Ford already has with the legendary F-150.

It's the same loyalty Tesla owners have with their electric vehicles. Ford is in a position to capitalize on this customer loyalty with extremely powerful, fully-electric F-150 that truck buyers actually want. Truck owners are an extremely loyal bunch, that's why Ford need to get this right.

Whatever the case, the pickup truck remains an important, profitable segment in the automotive industry. It's a segment ripe for electrification that electric automakers Tesla and startup Rivian already have their sights set on. Rivian's new RT1 pickup attracted crowds and loads of attention at the Los Angeles Auto Show. However, many people outside of the industry have not heard of Rivian. Ford however is a household name with a 116 year history.

With that being said, Ford should not sit back and let Tesla, or some other automaker, be the first to offer what could be the world's most powerful electric pickup truck. Ford should be pushing to become the automaker that can make that claim.

The F-150 is the Best Selling Truck

Ford is already in a good position with the F-150. The F-150 is already the best selling pickup truck in the U.S and it has been for over 40 years, which is a coveted spot for Ford, or any automaker, to be in. Ford sold over one million F-150's worldwide in 2018. Could the F-150 become the best selling electric vehicle? It's possible.

The F-150 is also Ford's bread and butter, so it's understandable why Ford does not want to mess with a good thing too much. However, Ford should take the industry lead and release the electric F-150 sooner rather than later, before the truck field becomes crowded with competitors over the next several years.

Although designing and building a new model takes years, retrofitting an existing model can be done much faster, something Ford might be, (and should be) already working on.

As electric vehicle sales start climbing, Ford's position should not be to just sit back and let Tesla or some other startup automaker steal its thunder with a electric pickup more powerful than any gas or diesel engine version.

Electric motors are more powerful and deliver instantaneous torque, something that gasoline or diesel powered engines cannot do. Ford just need to convince truck owners that electric motors are simply better, something a smart and savvy marketing campaign should be able to do.

However, there are still truck diehards out there that swear by a big ol' gas-guzzling V8 engine under the hood of their truck, often dismissing companies like Tesla and its CEO Elon Musk for trying to reinvent the automobile using battery power.

A new trend calling "icing" has been angering Tesla owners recently. It refers to when gas-powered truck owners intentionally block access to Tesla's EV chargers in some form of odd protest against electric vehicles and their environmentally conscious drivers.

Can these type of loyalists be convinced that electricity is the way to go, or be won over by an fully-electric F-150? They might, but Ford shouldn't stand by and let it a competitor do it first.

The Return of the Ford F-150 Lightning?

However in 1999, Ford's SVT Lightning F-150 returned after a three-year hiatus. As with its 1993-1995 predecessor, the design of the Lightning used the F-150 as a basis and added a number of beefed-up suspension modifications. 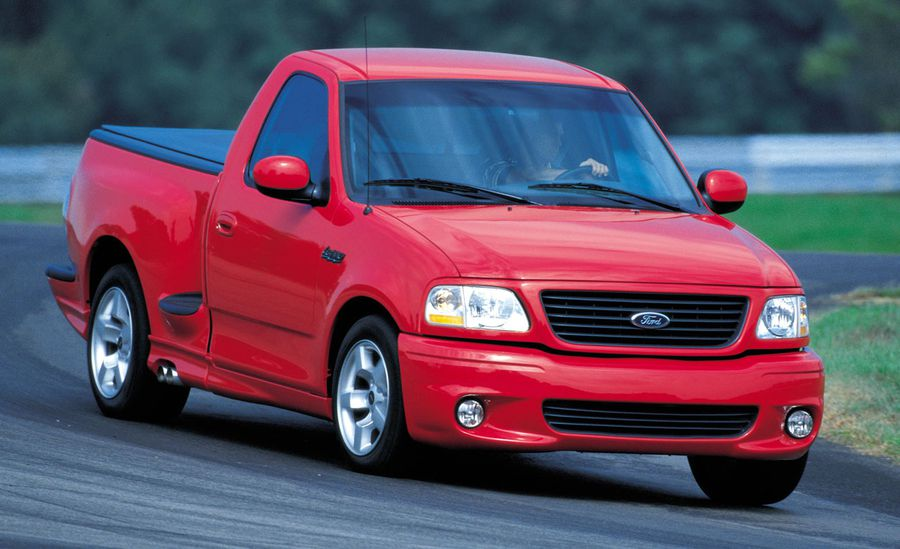 Ford used the 5.4L engine from the current F-150 outfitted with a supercharger. The engine produced 360 hp until it was increased to 380 hp for the 2001 model. These were impressive numbers at the time, but not anything close to what an electric motor can produce today.

Ford frequently advertises the F-150 as a work truck, a rugged "get things done" kind of truck, which it is. It is also becoming somewhat outdated mechanically, with a gasoline-powered engine and no hybrid option available—at least not yet.

The ladder-frame of the F-150 is a good candidate for electrification, with plenty of room for a massive battery pack under the truck bed. Although the battery would add considerable weight to the F-150 electric, offering a 1,000 hp or more from an electric powertrain should offset any additional curb weight.

Could the Electric Version be the Ultimate F-150?

Done right, a fully-electric F-150 could be the ultimate beast of a truck that sets the bar high for the rest of the automotive industry, as well as becoming a benchmark for all other gas or electric powered pickup trucks that proceed it.

Another option is that the Ford can engineer the F-150's battery pack to power tools and equipment, such as generators, pumps, welders, electric tools or work lighting. The possibilities are endless.

The current gas-powered F-150 is rated between 250 and 450 horsepower and 510 ft lbs of torque respectively. Adding a powerful electric drivetrain can make the F-150 one most powerful trucks on the planet—easily surpassing these specs.

So it's good news that Ford has finally confirmed that it's time to launch a fully-electric F-150, they just need to get it on the market as soon as possible.

And as a throwback to the past, Ford should name it the "F-150 Lightning".

Apple is Talks with Toyota to Build its Electric Car, Reports Say