Tesla to Reopen its California Factory After the State's Governor Allows Manufacturing to Resume, Despite a County Order to Keep it Closed

【Summary】​Electric automaker Tesla is set to reopen its Fremont, California factory and resume vehicle production after the state’s Governor Gavin Newsom eased some restrictions on manufacturing. However, Tesla’s decision to reopen the plant conflicts with local shelter-in-place orders.

resource from: Reuters
Tesla's factory in Fremont, California is the company's only vehicle production facility in the U.S.

Electric automaker Tesla is set to reopen its Fremont, California factory and resume vehicle production after the state's Governor Gavin Newsom eased some restrictions on manufacturing. Like most states, non-essential factories in California were ordered to close in March in an effort to help prevent the spread of the coronavirus.

Tesla Inc is aiming to restart production in its U.S. car plant in Fremont, California on Friday afternoon, just one day after Governor Newsom's announcement, according to an email sent by Chief Executive Officer Elon Musk to staff.

An email from Tesla's HR department viewed by Reuters indicated the plant will resume "limited operations" Friday, with about 30% of workers on a typical shift, though it was unclear how the plant would produce vehicles without the factory fully staffed, the report said.

The Fremont factory is Tesla's only U.S. vehicle production facility. The company's other factory is in China near Shanghai and produces the Model 3 for the China market.

Tesla's Nevada gigafactory which produces batteries for its vehicles as well as its plant in upstate New York are also scheduled to resume limited production activities.

"Our Gigafactories in Nevada and New York have also begun limited operations as approved by their respective states," the email to Tesla employees said.

However, Tesla's decision to reopen the plant conflicts with local shelter-in-place orders. Tesla's factory is located in the county of Alameda, which has more restrictive lockdowns in place than the rest of the state due to a higher number of coronavirus cases reported. Manufacturing businesses, including Tesla's factory, are directed to remain shut until the end of month, as per an extended county order.

Deliveries for Tesla long-awaited Model Y crossover began on March 14, just days before the shelter-in-place orders were put into place. The Model Y is being built at the Fremont factory and is expected to become a big seller, as the crossovers and compact SUV segment remains hugely popular with U.S. consumers.

Musk said previously that the Model Y has the potential to outsell all of Tesla's other models combined. The vehicle is key to keeping Tesla profitable going forward.

The automaker is coming off its third consecutive profitable quarter, the first time in Tesla's history. However, just as Tesla was gaining momentum with growing demand for its electric vehicles and higher vehicle production volumes at its Fremont factory, the coronavirus hit. 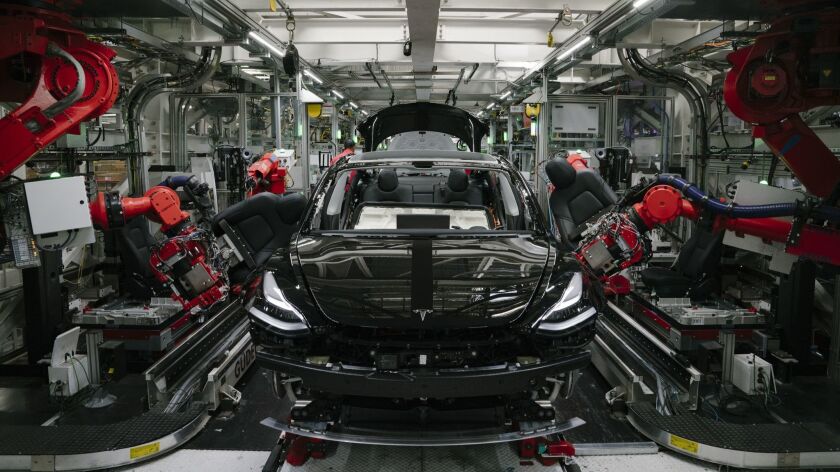 Tesla initially defied the county-wide order to close the plant in March. The factory continued to operate for another five days, with Tesla arguing with local officials that it should be deemed an "essential business."

In an email to employees in March, Musk wrote "My frank opinion is that the harm from the coronavirus panic far exceeds that of the virus itself."

At the time, Tesla employees were not being ordered to report to work, Musk said that any employees who feel uncomfortable coming back to work were not obligated to do so.

California's order from Thursday does not supersede the Alameda County's shelter-in-place orders, which expires on May 31, Alameda Sheriff's Office spokesman Ray Kelly told Reuters on Thursday. So Tesla is technically defying the order by opening the factory.

In a statement from neighboring Santa Clara County's Public Health Department, the Bay Area health orders remain in effect, regardless of any conflicting directives from California Governor Newsom.

"We appreciate that the Governor recognizes that California communities are impacted differently by coronavirus and can make decisions at the local level. In our current environment, if a county order differs from a state order, the more restrictive order takes precedence."