XPeng Motors Valued at Over $8.4 Billion Files for U.S. IPO, the Company is Backed by Alibaba and Xiaomi

【Summary】As existing shareholders continue to increase investments in EVs and related technologies, new participants are optimistic about China's growing electric vehicle market. As a result, electric vehicle startup XPeng Motors has strong financial backing and stamina for future development. The company has cash reserves of 8.2 billion yuan (US$1.19 billion), and is ramping up its investment in R&D.

author: iAsk
The Xpeng Motors P7 smart sedan is a strong competitor to the Tesla Model S in China.

On August 8, China's XPeng Motors filed with the U.S. Securities and Exchange Commission, for an initial public offering (IPO) on the New York Exchange under the stock symbol "XPEV". Xpeng is the third Chinese car maker going public in the U.S. following rival EV startup Nio Inc. and another newcomer Li Auto.

Xpeng listed the size of its offering at 85 million of ADSs (Each ADS represents two Class A ordinary shares), said in the latest prospectus updated on August 21.

The Green Shoe Options offers underwriters 12.7 million ADSs, at an IPO price between $11 to $13. XPeng is expected to raise up to $9.35 billion. At the midpoint of the pricing range of $12 per ADS, XPeng will be valued at roughly $8.4 billion.

The filing shows that the existing shareholders including Alibaba and well-known hedge funds Coatue, Qatar Investment Authority and Xiaomi have indicated interest in buying $450 million of the ADSs collectively.

In addition, Primecap Management Company, a Tesla-invested fund, will purchase $100 million of the ADSs. With purchases from the aforementioned institutions, XPeng will complete about 50% of the IPO fund raising.

If the price per ADS is $12, or at the midpoint of the range, the investors will have 49% of the XPeng ADSs, which is valued at around US$8.6 billion.

The interest of purchase by Alibaba, Xiaomi and other head investors has proved the confidence of the capital market in XPeng. The automaker's market value is expected to soar following the IPO.

The major institutional shareholders of XPeng before the IPO include Alibaba, IDG, Morningside Venture Capital, GGV, Primavera Capital, among others.

Alibaba holds 14.4% of shares and is Xpeng's largest external institute shareholder and the second largest shareholder after XPeng CEO He Xiaopeng.

The recent participation of Hillhouse, Sequoia, Sovereign Wealth Funds and other leading international investment companies, has also strengthened the board of shareholders.

Since last year, XPeng Inc. has adjusted its equity structure to prepare for its IPO. In July, Xpeng completed a Series C+ funding round of  $900 million. Together with the 1,895 million yuan of cash, cash equivalents and restricted cash in the company's books, Xpeng's cash reserves are worth roughly 8.5 billion yuan ($1.23 billion), which is higher than that of Nio and Li Auto. 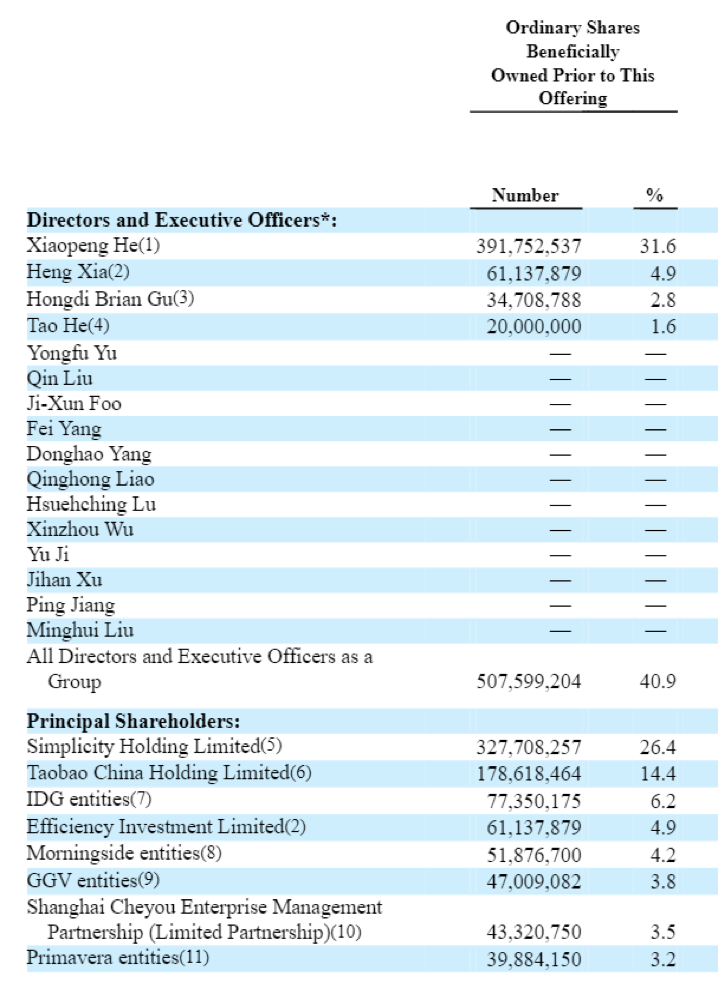 However, the biggest strength of Xpeng Motors is not its cash reserves, but its research and development and work on intelligent systems, including autonomous driving and a self-parking system.

As one of China's leading electric-vehicle (EV) makers, XPeng Inc. is the only company in China's new car-making force, who has launched two flexible manufacturing models — the self-built plant and the contract manufacturing.

Xpeng is also the only EV company that develops two vehicle platforms at the same time, the G3 SUV and the new P7 four-door smart sedan, which went on sale in April. 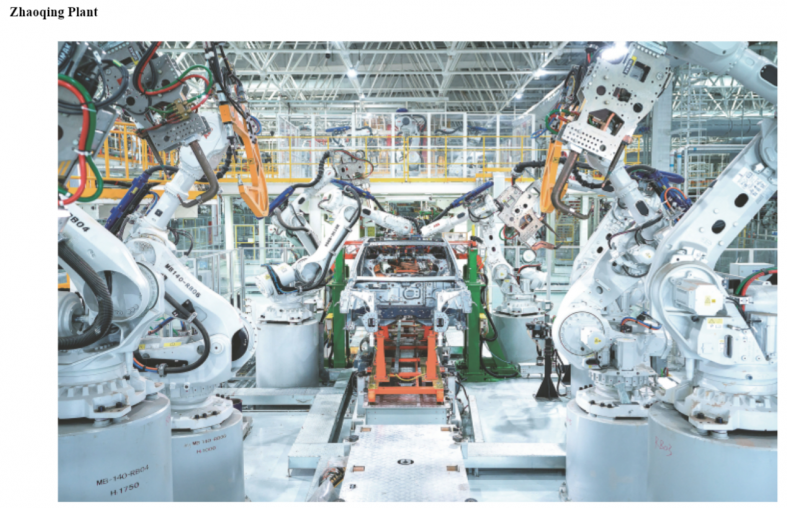 Xpeng positions itself as a high-end electric vehicle maker, with the G3 SUV and P7 sedan. The G3 can be regarded as the foundation for the sales and branding of XPeng, while the XPeng P7 sports sedan which is a rival to Tesla's Model S and Model 3.

The P7 is intelligently designed to offer an NEDC range of up to 760 km (439 miles) on a single charge, which is the longest among EVs that are available in China. The P7 also has a new, advanced battery pack co-developed with China's CATL.

Figure 3: The parameters of the two models of XPeng Inc.

In November 2018, Xpeng G3 SUV started vehicle production at the Zhengzhou plant. As of July, the company delivered a total of 18,741 units to customers. The new P7 sports sedan was launched in April of this year and rolled out at the Zhaoqing plant. in May 2020. Since then, accumulated deliveries have reached 1,966 vehicles.

Figure 4: The sales performance of XPeng G3 and P7

Up to now, the cumulative delivery units of the G3 and P7 sedan has reached 20,707 units, leading in the rank of Chinese EV makers. The company said in its prospectus that it plans to launch an intelligent electric Class A model in 2021, as well as a new intelligent EV model every year in the future.

Xpeng's approach differs from the user-centered service model offered by Nio and Li Auto's focus on delivering a longer range. Instead, Xpeng emphasizes that its core competitiveness is on intelligence, including the independent research and development of all software and the core hardware.

Xpeng's advanced autopilot system XPILOT and the vehicle's on-board intelligent operating system XmartOS can also be upgraded over the air, just like a Tesla model.

According to Xpeng, 90% of buyers have purchased models with the auxiliary driving function, and 50% of P7 buyers have ordered the 2021 model with the automaker's latest version of XPILOT, advanced autonomous driving system XPILOT3.0.

"The car industry should meet three standards in software and hardware. Firstly, the annual sales totals over 1 million units; secondly, the code includes over 1 million lines; thirdly, there are more than 10,000 parts," said He Xiaopeng, the founder of Xpeng Motors.

In order to achieve the ultimate status of an intelligent car company, XPeng invested most of its funds in technology research and development.

Figure 5: R & D investments by XPeng Inc., Tesla, Nio Inc. and Li Auto Inc. (The data of Li Auto Inc. only shows the performance in the first quarter of 2020). The data is from each company's prospectus.

The result is that XPeng is the first company to develop and commercialize self-driving software. The XPILOT self-driving hardware is powered by Nvidia's Xavier SoC, which supports level 3 self-driving.

The XPeng P7 is also far superior to similar models from rival companies in terms of the number of hardware and sensors installed in the vehicle, even competitor Tesla.

For the technology-intensive industry such as automobiles, the level of R&D investment determines the future technological autonomy and leadership. Thus the short-term losses caused by high R&D investment can be accepted by the capital markets.

Creating an intelligent travel experience for customers is the long-term corporate mission of XPeng. In the future, the company will continue its investment in research, development and technology.

With the transformation to produce technology and data-driven intelligent electric vehicles, XPeng plans to create a better mobility experience for customers, and also provide a strong driving force and technical support for its future development.

The automotive industry requires a high level of initial R&D investment in technology. After only 4 years since its inception, XPeng began to generate revenue from car sales when delivering its first electronic vehicle G3 SUV in the fourth quarter of 2018.

However, like most of China's automakers, Xpeng was affected by the COVID-19 pandemic in the first half of this year and production and output volume have declined slightly. But the company's overall performance is inevitably on the rise. 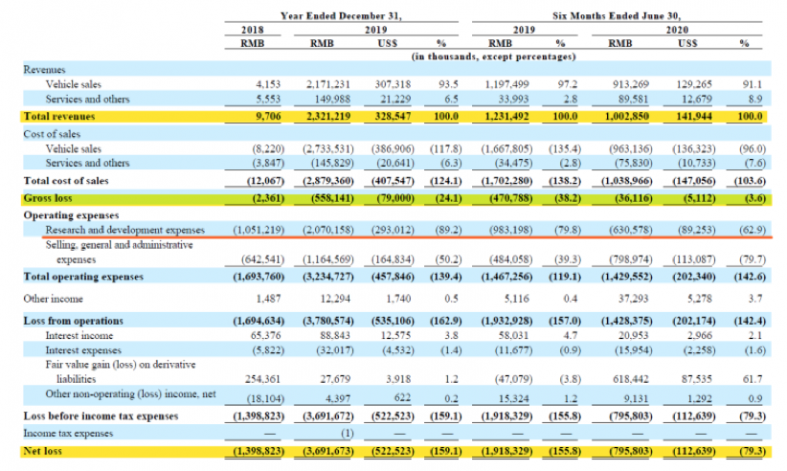 The two major revenue sources of XPeng are from the sales of intelligent electric vehicles and car related services, which mainly include ride service, financing and leasing, turbocharging and maintenance service, among others.

According to the company's latest income statements, the operating income of XPeng Inc. in 2018, 2019 and the first half of 2020 was 9.706 million yuan, 2.321 billion yuan and 1.003 billion yuan respectively, of which car sales contributed the most.

XPeng is the only company among  "China's Top 3 new forces of Internet car makers" that has set up its own plant that is fully operating.

Although the initial capital and technology investment is huge, it results in Xpeng being able to control product quality and the development of its core technologies. Furthermore, with the boost of sales volume and production capacity in the future, XPeng Inc. will enjoy much more room to improve the gross margin of its self-built factory than rival companies.

The prospectus said that Xpeng was affected by the COVID-19 pandemic, the G3 output volume in the first half of 2020 was impacted, with the company's revenue slightly reduced.

However, as China's auto market stabilized, Xpeng's new P7 smart sedan entered into volume production. The automaker's output volume has been growing steadily in the second half of this year. Therefore, Xpeng's revenue is expected to increase significantly, which will lead to higher profits. 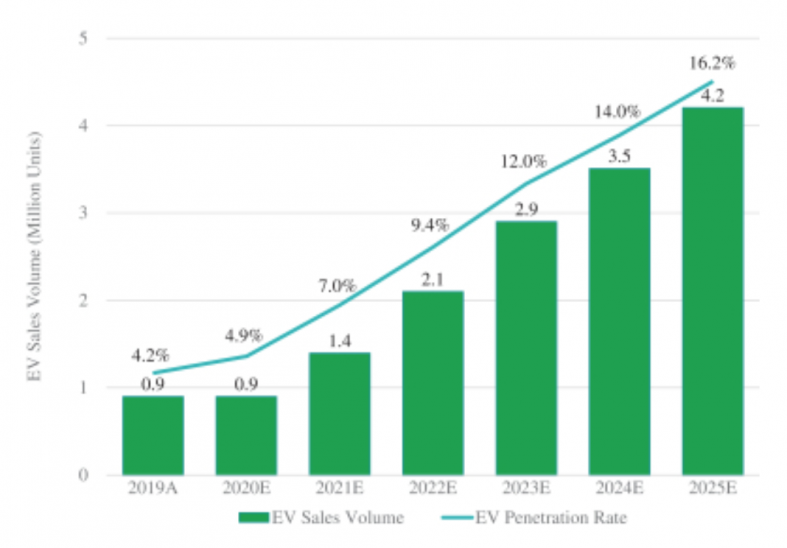 Wang Xing, the founder of Chinese shopping platform Meituan, predicted that "only three of China's EV makers will survive".

By the second quarter of 2020, the cumulative market share of the top five EV companies has risen from 43% in 2018 to 90%, according to the Joint Advisory Committee of China Passenger Car Market.

The future EV marking forces have a broader market, but the competition is also increasingly fierce. Shareholders continue to increase their investments and the new participants are optimistic about the market.

With cash reserves of 8.2 billion yuan ($1.19 billion), and the constant investment in R&D, XPeng has strong backing and stamina for future development.

However, XPeng's rise as one of China's leading EV manufacturers will also usher in tougher competition after its IPO.

What will happen to the new forces of Chinese EV makers by then? We'll just have to wait and see.