Serve Robotics was founded in 2017 as the robotics division of Postmates, a company that's also working with automaker Ford Motor Co on last-mile autonomous delivery services.

Uber acquired Postmates for $2.65 billion in 2020 and Serve spun off as an independent company in Feb 2021. Uber plans to retain a 25% stake in Serve Robotics.

The California company is a developer of tiny delivery bots, which the company calls "rovers", resembling small shopping carts, with a lidar unit supplied by Ouster mounted on top for autonomous navigation. The compartment is sealed to protect the contents and opens from the top so the customers can retrieve their food once the rover arrives at their location using the touchscreen interface on the rover.

The delivery rovers are fully-electric and can operate on sidewalks and other locations that cars cannot, making them well suited for app-based food delivery services in urban areas. Customers receive a notification when the robot is arriving so they can go outside and meet it.

Serve says its self-driving rovers have successfully completed tens of thousands of contactless deliveries in Los Angeles and San Francisco. The company has several established commercial partnerships in addition to Uber Eats. The company continues to expand its partner platform.

"Serve Robotics is pleased to have the backing of strong strategic partners able to support our intention to provide sustainable, self-driving delivery at scale," said Dr. Ali Kashani, Co-founder and CEO of Serve Robotics. "This initial round of financial and strategic support will allow us to continue advancing our technology, growing our team, and expanding our partnership platform." 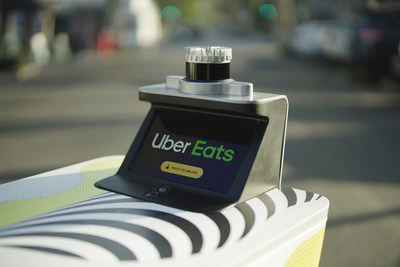 The Serve Robotics "rovers" will soon be used by Uber to deliver food in Los Angeles.

With Uber's Uber Eats division growing rapidly as a result of the pandemic in 2020, much of the ride-hailing company's focus lately has been primarily on food delivery, which took up the slack when Uber's core ride-hailing business slowed as people stayed home.

The technology has the potential to reshape food delivery. Last month, The on-demand robotic delivery service will be available to Uber Eats customers starting in Los Angeles early next year.

"Uber and Serve share a commitment to convenience and reliability," said Sarfraz Maredia, Vice President and Head of Uber Eats in North America. "As a Serve investor, we're excited to help shape self-driving delivery technology that can meet changing consumer and merchant needs."

Serve Robotics said it will use the new capital to accelerate the company's path towards scaling its commercial operations, expansion of its robotic delivery fleet and continued product development.